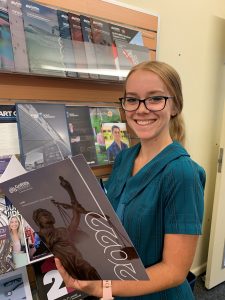 Ada, who is in Year 11 at St Ursula’s College, Yeppoon, said her interest in the law stemmed from her love of true crime stories.

“Prior to undertaking work experience with Katina Kyreakou at SMR, I’d completed almost two years of Legal Studies at St Ursula’s College, which gave me background on the ins and outs of court,” Ada said.

“I was concerned at first because I thought working with lawyers would be quite intimidating, but the atmosphere was what I enjoyed the most.”

“The friendliness and authenticity of every person was hugely admirable and, despite being on ‘opposite sides’ or working for other areas of law, everyone helped each other out,” said Ada.

During her time with Ms Kyreakou, Ada witnessed multiple cases and watched a jury be empanelled.

“I spoke with established lawyers and barristers and received advice from numerous people in the industry from the different areas of law,” said Ada.

St Ursula’s Deputy Principal – Teaching and Learning, Ms Belinda Connolly, said students interested in the field of Law and Justice were well supported with a choice of subject offerings at the College, regardless of ATAR or Skills and Training pathway.

“In 2022, in addition to Legal Studies as a Senior subject, we will have two students undertaking the Certificate IV in Crime and Justice in Senior school,” Ms Connolly said.

For Ada, Legal Studies will further equip her with the knowledge and skills needed to pursue a career in Law.

“After Year 12, I would like to work as a Legal Secretary while completing a Law Degree,” said Ada.

Engineering Their Own Paths