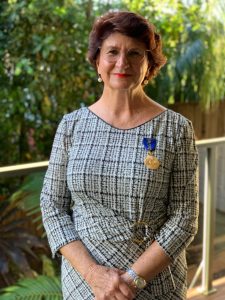 Past student and former Director of the Board of St Ursula’s College, Debbie Clayton was awarded a Member of the Order of Australia (AM) in the 2021 Queen’s Birthday list, in recognition of her significant service to tertiary education and to international study programs.

“It is really more a reflection on all the wonderful teams that I have worked with over the years,” said Debbie.

Debbie (nee Cumings), attended St Ursula’s from 1967-1971, but was not the first member of her family to receive an education at the College.

“My grandmother and my great aunt were pupils at St Ursula’s in the first year that it opened,” said Debbie.

“Their names were Joyce Patricia Gibson (Grandmother) and Sybil Gibson; from memory, they were pupils 19 and 20 in the register.”

A Boarding student herself from 1970-1971, Debbie said friendships and hijinks in the dorm were some of her best memories from St Ursula’s.

“I would describe my Senior year as very busy, with lots of study; there was great companionship from the other girls while we developed leadership abilities in a safe and supportive environment.”

“Although the Boarding regime was very strict, the College was run by very competent, educated and independent women,” Debbie said.

“The Sisters provided wonderful role models to us in this regard.”

Debbie took Logic as a subject at school and said that, on reflection, it was an excellent preparation for the mind.

After completing her Secondary education at St Ursula’s, Debbie studied a Bachelor of Applied Science in Mathematics and its Applications, a Graduate Diploma in Science Education, a Master of Applied Science (Research), and is also a graduate of the Australian Institute of Company Directors.

“I have had the privilege of living and working in many countries for blocks of time, including a 15-year consulting engagement with a government accreditation agency in the Sultanate of Oman in the Gulf States,” said Debbie.

Debbie, who is a widow with one adult son, currently works part-time as a Higher Education Consultant with a focus on International Education.

When she’s not volunteering her time in the local community as a Rotarian, a Member of the Philanthropy Board of the new Rockhampton Museum of Art or as a Member of the Board of Trustees of Rockhampton Grammar School, Debbie enjoys sailing, travelling, and playing Mahjong.

In 2021, Debbie walked part of the Larapinta Trail.

“I also have two cats in my life, one old cat that lives with me, and a grand-cat living in Brisbane with my son and his wife,” said Debbie.

Debbie’s advice to current students mirrors her own lifestyle:

“Work and play hard, be kind to each other,” Debbie said.

“Remember, real lives are not as they are portrayed on social media!”

WEX program an eye-opener for Chloe