Taleisha’s design will be featured on the Reds Team Jerseys of the Rugby season in 2022, which will be worn for the Indigenous and cultural rounds, and the Reds Women’s Team will wear this as their ‘away’ Jersey.

A Boarding student from Woorabinda, Taleisha, 15, said she entered the competition after being encouraged by Queensland Reds Indigenous Program Mentor, Mr Graham Leeson.

“Taleisha has been part of the Queensland Rugby Union (QRU) Future Indigenous Leaders Program since she was in Year 6,” Mr Leeson said.

“The Queensland Rugby Union Indigenous program was established in 2010 and, with the support of Rio Tinto and the communities of Cherbourg and Woorabinda, the QRU delivers the Future Indigenous Leaders Program to families from these communities,” said Mr Leeson.

“More recently, students from the Future Leaders Program have been invited to submit artwork for the design of the Team Jersey for the Indigenous and cultural rounds of the Rugby season,” Mr Leeson said.

“The Woorabinda community has a proud history and connection the Queensland Reds Indigenous Jersey Design; the previous three winners all coming from the community,” Mr Leeson told the full College Assembly.

“Taleisha is such a humble and gracious member of our College community, and we are so very proud of her,” Mrs Ryan said.

“The extended leadership opportunities offered by the Reds Future Leaders Program has nurtured Taleisha to emerge as a leader in her community, and in the College,” Mrs Ryan said.

Taleisha said she was happy and amazed by her success.

“The artwork I entered for the Jersey Design competition was the first dot painting I’d ever made,” said Taleisha.

Taleisha’s mother, Jacinda Harrison, travelled from Woorabinda for the presentation and was overjoyed with Taleisha’s design being chosen for the 2022 Indigenous jersey.

“When Taleisha told me she had won the Jersey Design competition, I was so excited,” Ms Harrison said.

Jacinda herself enjoys painting and taught Taleisha how to dot paint on the school holidays earlier in the year.

“Painting is therapeutic; you have a connection to the meaning behind what you’re doing,” Ms Harrison said.

Taleisha continues to be connected to community through upcoming work experience at Undoonoo Early Learning Centre in Woorabinda during her school holidays.

“I’m so proud of Taleisha. She’s a great leader for kids back home in the community,” Ms Harrison said. 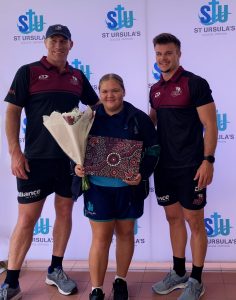 Engineering Their Own Paths